Therapeutic and Diagnostic Challenge of Idiopathic Granulomatous Mastitis: A Case Report and Review of the Literature

Idiopathic Granulomatous mastitis (IGM) is a chronic benign inflammatory disease of the breast that may mimic breast cancer. It is most common in parous young fertile women, although it can occur in nulliparous. It affects mostly women of childbearing age with a history of breastfeeding. IGM is an idiopathic disease due to the influence of some environmental factors in genetically predisposed subjects. Several pathogenic hypothesis have been proposed in the last years (autoimmune, hormonal, infective genesis). Because the clinical presentation can mimic infectious mastitis or inflammatory carcinoma, the disease course is often protracted. The diagnosis is made by histopathology. Ultrasound, mammography, and magnetic resonance imaging are not specific; however, ultrasound and mammography should be done to exclude other pathologies. There is no universal treatment of GM. We report in this manuscript one case of IGM through which we mention a therapeutic and diagnostic challenge with a brief review of the literature. The management was successful despite the long way made by the patient before she acceded to a proper treatment.

Granulomatous mastitis is a rare, benign inflammatory breast disease of unknown etiology, mainly affecting women of childbearing age. Although it presents with features of an abscess, it can be mistaken for breast cancer [1]. The importance of recognizing this disease is because its presentation can clinically and radiographically mimic breast cancer [2], leading to a diagnostic challenge, as well as anxiety during the evaluation [3]. The diagnosis of granulomatous mastitis (GM) is often established after excluding inflammatory breast cancer, autoimmune breast disease and other etiologies such as tuberculosis, fungal or parasitic breast infections. A definitive diagnosis requires a histopathological confirmation of multinucleated giant cell granulomas with micro abscesses [4]. It is thought to be caused by either infectious agents or foreign material, which triggers the immune response system, leading to granuloma formation. Some of the known inflammatory etiologies of GM are tuberculosis (most common, caused by Mycobacterium tuberculosis), sarcoidosis, fungal infection, and autoimmune disease, such as Granulomatosis with Polyangiitis and giant cell arteritis. These entities are clinically, pathologically, and radiographically indistinguishable from idiopathic granulomatous mastitis (IGM) [5]. Different treatment modalities have been reported, with varying success and recurrence rates, but no consensus currently exists as to the ideal treatment regimen [6]. We report through this case our experience in term of clinical, biological and pathological finding and management.

30-year-old patient who consulted for a hardening of the right breast evolving for two years. Pauciparous with no particular history and no notion of oral contraception. History of the disease: The beginning was marked by the occurrence of a hardening of the right breast in the post-partum during breastfeeding with collection of fluid fistulized to the skin having motivated several consultations in different tertiary structures during which fluid drainages were carried out after realization of breast ultrasound showing multiple lesions classified ACR2 with treatment based on antibiotic and local care without success for a period of one year. In view of the persistence of the symptoms, another breast ultrasound was performed and came in favor of solido cystic tissue lesions of the upper internal quadrant and the external quadrant classified ACR4b. Following this result, ultrasound guided biopsies were proposed. During the biopsy, the sonographer describes fluid collections with no visible tissue. Samples of fluid were taken and the results was in favor of an absence of germs with a negative culture. As the treatment was not successful, she decided to seek for care in our department. At her arrival in our department, the examination found an apyretic patient with asymmetrical breasts; left breast without particularity and right breast having a bumpy appearance seat of several scars of fistulization without inflammatory signs (Figure 1). On palpation, we noted in the inner upper quadrant the presence of a hard, irregular, painless and mobile mass compared to the 2 planes measuring 4 / 3cm and in the outter upper quadrant  another hard, irregular, painless and mobile mass compared to 2 planes measuring 10 / 8cm with retraction of the mammal without pressure flow. The axillary areas were free. The rest of the clinical examination was unremarkable.

We decided to repeat a mammography coupled with an ultrasound. The mammography found the presence of 04 opacities interesting the different quadrants of the right breast of variable size and tone, well limited measuring for the largest 5 cm of long axis, absence of suspected micro calcification focus, respect for subcutaneous fatty tissue with a fine and regular skin line   (Figure 2 ). The ultrasound breast exploration shows the presence of 04 interesting collections respectively the upper outer quadrant, upper internal and junctions of the upper and inner quadrants. Well limited with heterogeneous thick content with cystic masses of the internal upper quadrant without tissue lesion with free axillary areas. All in favor of liquid collections of the upper quadrants of the right breast with a cystic cluster classified ACR3.  A biopsy was thus carried out. The study of the biopsy carrots found a mammary parenchyma seat of an epithelioid and gigantocellular granulomatous reaction joined to a polymorphic inflammatory infiltrate made of lymphocyte grouped in place in lymphoid follicles, of plasma cells and neutrophils in favor of mastitis epithelioid and gigantic-cell granulomatous without caseous necrosis and without tumor lesions. Etiological assessments were made:  a normal face pulmonary X-ray, search for BK by PCR and in sputum were negative, ANCA, C3 and C4 without particularity, kidney function (urea, creatine and proteinuria of 24h) normal HIV and Syphilis serologies were also negatives. We concluded to an idiopathic granulomatous mastitis. Patient benefit of medical treatment based on oral corticosteroid for 6 weeks and oral antibiotics (clavulanic amoxicillin: 1g per 8h for 14 days and metronidazole 500mg per 8h for 10 days). The corticosteroid posology was as followed prednisolone 20mg: 60 mg per day for 15 days, after 40 mg per day for 15 days followed by 20 mg per day for 15 other days. The patient was monitored every 15 days by breast clinical examination. At the end of the treatment, she had a good clinical response. 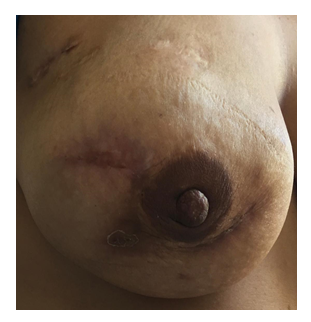 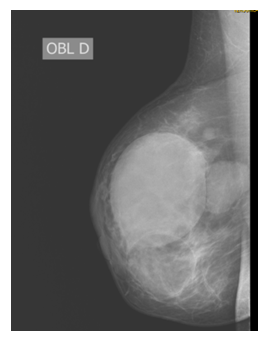 Figure 2: Opacities of the breast at the mammography.

This case is a learning lesson about the challenge with the diagnosis and the management of IGM and it illustrates that this entity is not well known by the clinicians and the radiologist.

Contribution of the Authors

All the authors participated to the management of the patient and the writing of the manuscript.

Archives of Biochemistry and Molecular Biology